Details
Appendices
Appendices
Each companion dislikes the companions on either side of them (Example: Borcha dislikes Deshavi and Klethi). If you wish to maximize your number of companions, you can choose 2-3 from the top circle and 4-5 from the bottom circle that are not touching. The two-way arrows indicates companions that like each other, which can help balance dislikes, increasing the effective limit.

In Mount&Blade you are not the only hero. When exploring the taverns of Calradia you will come across some named people who are willing to join your cause, for a price of course. Their locations are random and will change from time to time, so check taverns regularly until you find all of them. You can also pay a Traveler to tell you the location of any companion (30 denars per name).

Just like your character, companions heal between battles on a percentage basis and can never be killed or taken prisoner, although some mods alter this.

At low levels, companions are very weak; most of the time if you don't completely obliterate the enemy you'll end up realizing that your companions have been knocked out. However, since companions can level just like the player character they can end up much more powerful than even the highest-level troops. Outside battle they contribute their skills to the party as a whole (see the party page). 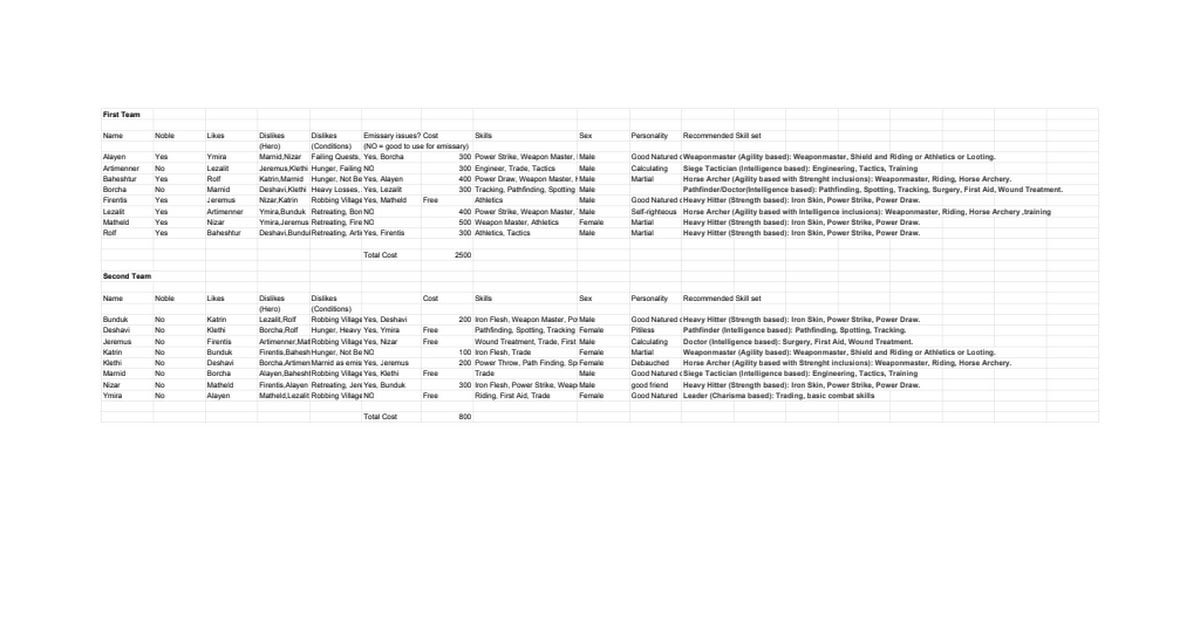 Each Companion has individual likes and dislikes. Each likes one other Companion and dislikes two others, and these feelings are mutual. Over time, their dislike will probably make one decide to leave. If you follow the story a Companion tells you during your first meeting you will get an idea of what Companions and actions they will like or dislike.

Each Companion tends toward a specialization. Certain skills will contribute to the party as a whole; others are personal or leader only (useless in a Companion, but when made vassal becomes useful). When a Companion's health falls to 33% or below the name will be shown in red text and any of their skills that were aiding the party will not work until they heal above 33%. Those with healing abilities should be kept at the bottom of the party list to ensure that they see less battle and therefore are less likely to be wounded too badly to heal others.

Looting is the only party skill whose base attribute is Agility (Klethi is the member best suited for looting as her Agility can be raised the quickest).

Trade is the only party skill whose base attribute is Charisma (if you want to have a large party, then Charisma is necessary, so you should specialize in trade yourself).

All other party skills are Intelligence-based. It is possible to maintain extremely high intelligence party skills with only two companions by only raising their intelligence attributes and putting most of their available skill points into party skills (e.g. teach Ymira First Aid, Wound Treatment, and Surgery, teach Borcha Spotting, Tracking, and Path-Finding and give each of them either Engineering or Tactics. Every three levels will give the companions six skill points to upgrade four party skills with two left-over to upgrade personal skill. It goes without saying that those two members will be poor soldiers and should be well-protected at the bottom of the party list. They will also gain the bulk of their experience through training and quest completion.

One of the biggest advantages Companions have over standard troops is that they can gain levels and develop their skills in the same way as your own character. You can even customize their gear, outfitting them with exactly what you want them to use.

To customize a Companion's abilities when they level up, open the party screen () and talk to the hero you want to upgrade, then choose 'Tell me about yourself', and you will see that Companion's character window. To customize their equipment do the same but choose 'Let me see your equipment', and you will see the inventory. Just as with your own character, Companions can only use equipment if they meet its minimum requirements.

Pillaging villages is a very lucrative business. Sadly some companions object to this practice, forcing you to either pillage in moderation or build a party without the heroes Bunduk, Firentis, Jeremus, Ymira and Marnid.

This table helps picking a pillage-happy party with not too much bickering. To use this table, select the champions you want and make sure everyone got a neutral or positive rating. Meaning you can not have Klethi and Artimenner, without balancing it out by having Lezalit and Deshavi too. All the companions who are not pillage-happy, or dislike it, have been removed from this table.

If you make your own kingdom you can also give your companions fiefs to make them vassals. This can be a blessing early in the game because you have allies to help you fight large armies. However, if you plan to make allies you have to be careful about who you give fiefs to. Giving fiefs to companions who are not noble may anger other lords (-2 to -5 penalty). Once lords, the faction of the troop they recruit depends on their own faction.

How To Hire Companions In Mount And Blade 2: Bannerlord Gamepur

The nobles are circled in red.

If your companions left over a dispute or if you were defeated in battle you can randomly find them in a city tavern. The best way is to find a Traveller in a tavern and ask him where to find your companion. Then head quickly into that city, because your companion can move in the meantime.

Where To Hire Companion Mount And Blade 2