A few months ago my dad gave me a spare computer and after a bit of research I set out on creating a home media server. A couple of weeks later I realized this wasn't just a project, it was a full-blown hobby.

After a ton of trial and error and a couple of hard drive wipes later, I've finally achieved a setup that I am truly happy with.

My goal here is to document as much of it as possible, and be as available as I can in the comments here so I can help out anyone else starting their home server adventure!

By the end of this guide, you will have a server that lets you access your media wherever you want, automatically grabs movies and tv shows when they are requested via a web UI and is optimized for seeding.

While all of the services we install will be running in Docker, this setup expects you are using Ubuntu 18.04. You can follow along, but when I start talking about mounting hard drives and writing bash scripts you may have to figure stuff out on your own!

IV. Mounting Multiple Drives as One

Here's the stack we'll be using. There will be a section describing the installation and configuration for each one of these :)

Docker lets us run and isolate each of our services into a container. Everything for each of these services will live in the container except the configuration files which will live on our host.

Plex is a 'client-server media player system'. There are a few alternatives, but I chose Plex here because they have a client available on nearly every platform.

Transmission is a torrent client. I used to use Deluge but honestly found it pretty buggy and unreliable. Transmission also lets you easily run bash scripts whenever a torrent finishes which is huge.

Sonarr is a tool for automating and managing your TV library. It automates the process of searching for torrents, downloading them then 'moving' them to your library. It also checks RSS feeds to automatically download new shows as soon as they're uploaded! Radarr Is a fork of Sonarr that does all the same stuff but for Movies

Tips for managing your hard drives

Here are some tips for how to manage your hard drives and data.

I use private trackers to get my torrents, and this means I need to maintain a ratio. If you aren't familiar with this term, it basically means you should be uploading as much, if not more than you download.

The best way I've found to do this is to mount your drives directly to the machine that handles your downloads. This means you can configure Sonarr and Radarr to create hardlinks when a torrent finishes. With this enabled, a reference to the data will exist in your media directory and in your torrent directory so Transmission can continue seeding everything you download.

Can also be written as Space vs. Reliability and Speed. I'm a freaking hoarder when it comes to media now, so I go with HDDs. This means I need to worry about my drives randomly dying.

If you roll with SSDs, I envy you and you should skip this next section!

HDDs are very prone to randomly dying and you need to prepare for this. You can either set up an array of drives and use something like RAID, but you usually end up losing some space and it's not very easy to expand. I'm building my library from scratch so I want to be able to expand the space on my server as I download more media.

So instead, I mount all of my drives and then use mhddfs to treat them as one file system, and what's really cool is that it automatically fills up your drives in order.

update: I still haven't found a good way to keep backups of this data and am actually working on a way around this now. 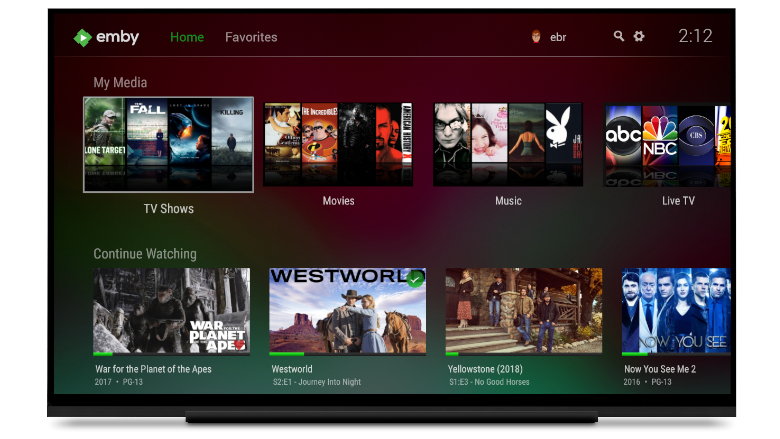 mhddfs contains a bug where you can occasionally run into a segfault error when mounting your drives. You'll want to install it via the patch in this repo, but it's a bit tricky.

The docker installation method is outdated and doesn't run so you'll have to install fakeroot and run the command from the Readme.

It'll give you trouble about signing, ignore it and install the .deb package

To get your drives to mount on boot we have to edit your /etc/fstab file. Add the following lines at the end of your file and replace the drive IDs with your own.

This mounts both drives on /mnt/hdd1 and /mnt/hdd2 and then mounts them together via mhddfs on /mnt/media. Now let’s set up our file system with a folder for torrents and a couple for our Libraries.

I also like to keep my configs in one easy place in case I want to transfer them anywhere, so let’s create a folder to hold our docker container configs and create our docker-compose.yml file

This will start your Plex server on port 32400, and add the volumes /mnt and ~/docker-services/plex/config onto the container. If you are trying to move your current Plex configs over, run something like this

Note that plex is looking for your config directory to contain a single directory Library. Look for that directory and copy it over.

If you are on something other than Ubuntu, refer to this page to find your configs.

Notice how we mount our torrent drive on the container in the same location as the host, rather than something like /downloads (which is suggested over at linuxserver). This, plus the config below ensures Sonarr and Radarr send torrents to the right directory.

Once Transmission has started for the first time, it will make a settings.json file for you (and will overwrite/reset it every time you run docker-compose up). here are some changes you should make to the settings file. Come back here later to make these changes once everything is started, then run docker restart transmission.

Note: This get’s reset every time you create your container for some reason. Keep a backup!

See that script that get’s run once a torrent is done? This will search for any .rar files and decompress them in your torrents. Super helpful, let’s make that and then we’re done here!

This is super basic and just boots your Jackett service on port 9117. Doesn’t need much else!

Now, these guys are freaking TRICKY. Make sure those PUID and GUID match the ID for your user and group… and make sure that user has read-write permissions for /mnt/media. Sonarr and Radarr are going to try to be creating folders and files in there when they copy or hard link files over.

If you are running into issues, check the logs of the docker container or the logs in the web UI. It should tell you exactly where it’s having trouble. Then log into the user you set it to run as an attempt the same actions. See whats going on first hand.

Horse life download. This will open Ombi on port 3579 but sadly they don’t have SSL support by default. I can create a post on adding LetsEncrypt to this setup if it get’s enough traction!

Run this command to boot up all your services! Remember to go back and update your Transmission settings after this.

You now have these services running locally. Go to their web UI’s and configure everything.

There is some final configuration you will need to do that is out of the scope of this tutorial, but I can help if need be.

You will have to

Now go invite your friends to your Plex server

Nero MediaHome is an overall media organizer which allows you to also view your multimedia files on your television and other devices which can find and connect to a media server.

With MediaHome, you can playback videos and photos on external devices, organize your media collections more efficiently and turn your PC into a media streaming server. It also works perfectly with consoles such as the PS3, PS4, Xbox 360 and the new Xbox one.

In addition to functioning as a media server, Nero MediaHome is also able to add labels to your media files, create photo books and even share things to your Facebook page. As with most software produced by Nero, this application can also burn stuff to your blank CDs and DVDs.

Easy as pie, MediaHome works over both Ethernet and WiFi connections while sporting a sleek interface.

Nero MediaHome is software which can stream media on DLNA devices.

This download is licensed as freeware for the Windows (32-bit and 64-bit) operating system on a laptop or desktop PC from media players without restrictions. Nero MediaHome 2015.09.21 is available to all software users as a free download for Windows.