After experiencing JBL L26, I really wanted to get my hands on JBL L100 to see what they are all about. I patiently waited for a year, and eventually, a set came up on eBay – 2h drive from where I live. I made an offer and couple of days later I became an owner of a set of legendary JBL L100A.
As expected from 40 years old second hand speakers, they had normal wear and tear marks on the cabinets, slightly pushed in tweeter dust caps and crackling potentiometers – nothing that would put me off from buying them. Because I was redecorating the whole house, these were placed in the attic and not touched until very recently, when I decided to finally test them.
Please note – prior to this review, I replaced the crackling attenuators with like-for-like l-pads. I also recapped the crossover with basic polypropylene capacitors, as the original ones where slightly out of their tolerances. The wires were replaced with basic OFC cables. More details about these upgrades can be found in the upgrades section. Speakers in their original conduction, were unlistenable, mainly due to the poor connection at the l-pads, which caused distorted and breaking sound. This means that my subjective views below refer to the sound that could be achieved with these speakers, with a bit of work. You will not get the same sound if you buy them and leave them in ‘original’, out of spec condition.

The JBL L100 Century are the consumer version of the legendary JBL 4310 studio monitors. In the late 60s JBL already had a great reputation for making very accurate, full size monitors for studios. Growing demand for more compact control room monitor, forced JBL to start working on the 4310 model. The requirements were: high power handling, high acoustic output without distortion and smooth frequency response thought entire audio spectrum – all of that from a 45l enclosure. Two years after the work begun, JBL Professional Division introduced the 4310 studio monitors. These speakers quickly became first choice for many well known studios, including Capitol, Deutsche Grammophon, EMI, London/Decca, RCA, etc. In fact, these monitors became so popular, that many musicians and engineers started purchasing these for home use. This in turn, encouraged JBL to produce the consumer version of these monitors – JBL L100. JBL claimed for these to be acoustically identical to the studio equivalents, but finished in more provocative style, appropriate for home environment. And this provocative style is one of the most characteristic features of the JBL L100 speakers – the open cell foam grilles with truncated pyramids. I dare to say that these are one of the most iconic speak grills ever made.
There are different version of both studio monitors as well as consumer speakers: 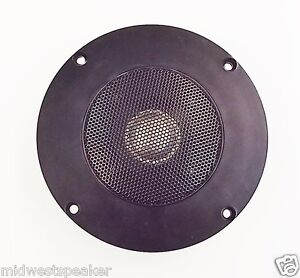 These JBLs are a little like Marmite – you either like them or you don’t. I personally really like them. There is something very appealing about the large white diaphragm and non linear drivers layout – studio heritage perhaps?
The finishing quality of the drivers and attention to details is astonishing. Even these days we rarely see so well made drivers, not to mention 40 years ago. Bass and midrange units are powered by large Alnico V magnets, whereas tweeters are energised by respectable size ferrite magnets. Baskets of the bass and treble drivers are made from a black powder coated aluminium. All diaphragms are made of paper, yes, even tweeters – which is not something that you come across in modern speakers.
The original crossovers are probably the weakest link of these beautiful speakers. They consist of two high-pass filters (two electrolytic capacitors) – one for midrange and one for tweeter, as well two l-pads. The potentiometers are made by Alps, and look like quality units, however, if you are planning to use the speakers with original crossovers, the l-pads will need to be cleaned or replaced.
Cabinets are made from 18mm chipboard, finished in oiled walnut veneer, without any internal reinforcements – fairly rigid but we can do much better nowadays. The grilles… well, the original grilles are very unique but the open cell foam tends to deteriorate with time, hence, you would have to be very lucky to find original, pyramid shaped foam grilles. There are companies that make reproduction of these grilles, but they cost a fortune.

A lot of music that I listen to is folky and acoustic stuff, without very complicated passages. When I plugged these JBLs for the first time, the thing that struck me was how natural and realistic the voices sound when compared with my modified Yamaha NS1000 which I currently use as my mains speakers. I could not believe how much more realistic Bob Dylan’s voice sounded on Girl From the Country North. The sound was not necessary more clear, if anything it was more rough, but there was something very appealing about it. It was like the singer was singing in a different tonality. If I was to use a metaphor, the NS1000 sounded digital, whereas L100 sounded analogue. Not as refined but very engaging. What benefited Bob Dylan’s voice, did not benefit Eric Bibb’s, which sounded much more natural on my NS1000.
Whenever I test any speakers, I always start with tracks that allow me to isolate sounds. I.e. I use recordings with drums only, with guitars only, with a cappella singing, etc. Then I jump to more complex tracks. This process allows me to identify with greater confidence how the speakers reproduce given instruments/sounds in isolation and then as a part of more complex music passages. And the JBL L100 are quite good at playing different sounds in isolation. The vocals are very special and clapping sounds very realistic. The string instruments sound very good too and I could not really find anything negative about wind instruments. But what surprised me the most is how realistic the drums sound. Probably the most realistic presentation I’ve heard so far. And it is not even the good attack, it is more the tone of it and that you feel like the drums are being played in front of you. Bass is nice and punchy but when plugged into a generator, you cannot hear anything below 40Hz. However, you rarely miss it when listening to most of the tracks.
When it comes to more complicated music passages, it is totally depended on the music choice. Some tracks seem to suit JBLs where as others not. You also start noticing lack of balance, especially when you compare them with very linear speakers. This is probably first set of speakers that I am struggling to decide if I like them more than my current speakers or not. Some really well recorded tracks seem to go better with very refined and analytical sound on Yamaha NS1000, whereas others seem to suit the less refined but ‘honest’ style of JBL L100.
In terms of soundstage, the L100 seem to play everything from the speaker line, with the vocals being pushed in front of the speakers, so they do not give an impression of a deep soundstage. Stereo presentation is fine, however, the speakers do not ‘disappear’ from the room. Your are conscious that the sound is coming from the speakers. It may be because of the bass driver doing so much midrange, and therefore, having really large radiating area generating midrange. This brings us to the subject of positioning these speakers. They are much better lifted off the floor at least 50cm, so the bass driver is closer to the height of your ears.
If I was to criticise JBLs for anything, it would be their rough edges and boosted upper midrange/lower treble, which make them harder to listen to for long periods of time. Also, as soon you start playing them loud, you notice the edginess a lot more, and if you go for concert listening levels, you may get your ears bleeding. Overall, very impressive speakers as they are. I’m not quite sure why people refer to these at tizz and boom as, they do so many thinks so well. Ok, they may not be the most balanced speakers ever, but they are very natural and enjoyable to listen.