Join us under the moon light at the Burke Mountain Nordic Center for a guided snowshoe tour, followed by a campfire and s'mores. 'Magical Mayhem!' Is the second segment of the one hundred and first episode of Jake and the Never Land Pirates. When Captain Hook steals Beardini's magical rings, he intends to use them to get all the sunken treasure, until Captain Hook makes a big mistake on using all three rings together and unleashes an underwater volcano. Jake and his crew must retrieve the rings before things get worse. Magic, Music and Mayhem was the name of a fireworks display held as part of Mickey's Pirate and Princess Party hard ticket event at the Walt Disney World's Magic Kingdom near Orlando, Florida.This fireworks show is shown in place of the regular Wishes display during the event. In June 2010, the show replaced Wishes during regular park hours as part of the Summer Nightastic!

The story of Magic & Mayhem is a familiar one. You are an enthusiastic young wizard and upon graduating from the magic academy, you report for duty at your favorite uncle's laboratory, only to find it wrecked and your uncle gone. You must find your uncle, by completing over 30 single player missions or 40 multi-player maps with friends over a network or a null modem connection.

As soon as the game loads up, you know you're in for something different. Rather than the standard full motion video or animated opening sequence, you are treated to a wonderful, almost old-fashioned, clay animation telling you the story thus far, all accompanied by an ethereal, lilting Celtic tune.

The quest to find your uncle takes you through elaborate 3D screens in Celtic, Greek and Medieval lands and involves you in a mixture of traditional strategy and magical combat. You have a host of spells at your command with which to fend off the enemies you encounter, such as zombies and brownies who are hell-bent (literally) on your destruction. You can summon up the elements to Meteor Shower your foes or Lightning Spell them into blackened ash. Other spells, such as the liquefying Gooey Blob, have to be seen to be appreciated fully.

If you don't want to get too closely involved in mystical combat (you wimp!), you can use a selection of creatures to help you with scouting or fighting. Your ever-ready raven friend Hermes shadows you to give advice and guidance when needed, so you never feel too frustrated while playing. After each battle, you are awarded experience points that can be spent on extra health, different spells, or obtaining more creatures to control in your battle against evil.

The presentation of this game is superb, with excellent quality and clear graphics (no 3D accelerator card needed, a welcome change) and atmospheric sound. The gameplay allows gentle acclimatization and entertainment while learning the spells. But be warned, for the game's inherent Artificial Intelligence feature analyzes the moves you make and after several games any shortcuts you've discovered may not be there next time! This promotes some healthy lateral thinking in how you play, so you don't get trapped in an area of the game you had problems getting out of the first time around. This game is highly recommended for hours of intelligent entertainment.

Graphics: Detailed yet clear and textured 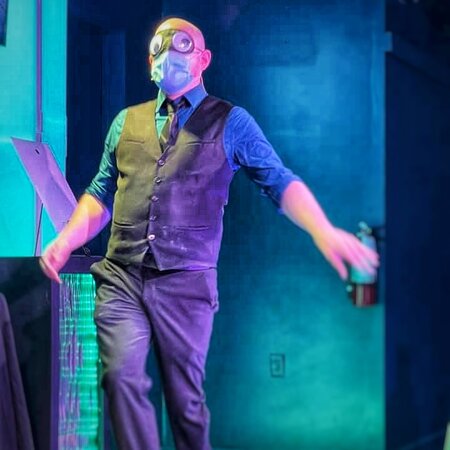 Sound: Eeerily mystical, in keeping with the feel of the game

Enjoyment: The variety of missions keeps the game fresh

Replay Value: Artificial Intelligence within the game means you can play differently every time.

Any true fan of strategy games is more than familiar with X-COM: UFO Defense. Generally hailed as one of the best turn-based strategy games of all time, the game boasted a simplicity of design and interface that, when paired with the title's deep storyline and suspense filled missions, created a play experience that was both immediately accessible and feverishly addictive. Now, many years later, the designers over at Mythos have finally released an all-new strategy world for players to explore. While the mythical lands and real-time play are certainly a big change from the experience the team delivered with X-COM, gamers will immediately recognize some of the same design theories - deep story and addictive gameplay backed by a simple control scheme - that made Mythos a legend in the first place. The story starts simply enough - you are a young magician who has finally convinced your uncle, a powerful wizard, to take you on as an apprentice. When you show up at his house to begin your training, you discover that he has disappeared without taking any of his equipment with him. You hop into your uncle's magical vehicle and use it to transport yourself to another dimension where you hope to find out what happened to him. Along the way, a talking raven, which you presume to be your uncle's familiar, joins you. Soon you discover that the land you have entered is being oppressed by a powerful wizard who you must defeat in order to progress further. As you continue, you will make powerful allies, uncover hidden plots, and do battle with each land's magical master in order to gain access to new areas and eventually to find your uncle. The story is unusually intense, creating doubt at every turn about the true motives of your friends and opening up new areas to explore just when you think you've beaten the game. Unfortunately, this aspect of the game is completely linear and the story unfolds the same no matter how you play.

The actual gameplay is an entertaining new take on the standard real-time strategy formula. You control your character with the same basic point and click interface we've seen a thousand times before. In order to defend yourself from the outside world, you'll have to cast spells which you select before you enter a given world. While there are a few direct effect spells like fireballs and magic spheres, most of the spells in the game are summoning magics that instantly create a certain type (depending on which spell you cast) of creature which is then under your control. Different critters have different powers, the Unicorns are strong fighters that are particularly effective against the undead, Bats are weak in combat but are exceedingly fast, and Redcaps are scrappy little guys who can sling rocks at the enemy. To keep this from breaking down into an endless summoning of otherworldly beasties, Mythos has added a few twists. First, casting any spell costs mana, which your character has only a limited supply of. During gameplay, your mana can only be replenished in two ways - gathering Mana Sprites, colorful items that replenish a certain amount of mana when activated and controlling a place of power. Having your character or one of your character's minions standing on top of a place of power will cause your character to slowly regenerated mana. Panasonic toughbook cf 31 drivers windows 10leadingdwnload. You can speed up this process by controlling more places of power. Second, you can only control a certain number of creatures at one time. Once you hit your control max, you will not be able to summon any more help until one of them dies. With these controls in place, each level usually plays out with you madly dashing to discover and gain control over any nearby places of power, guarding them with a few very tough creatures and then beginning your search for the magician who has control of the area. Once you find and kill this magician, a portal will appear that will take you to the next land.

If you think this sounds a bit repetitive, you're right.. after a few hours the play does wear down a bit. What keeps you going on and on is the game's storyline, which infects you with that evil 'just one more game' feeling we're all so familiar with, and the game's interesting experience and magic systems. Each level usually has more goals that are to be accomplished than just killing the wizard in charge. While you don't have to actually do any of these things to keep playing, they will earn you experience, which can be spent at the end of each level on improving your magic power, your strength, the number of creatures you can summon at once and the number of spells you can carry with you onto a level. Many of these subquests will also earn you a new talisman, an item that can be used by your characters to create a new spell. Before each level, you're able to put all of your talismans into any available slot that you have open in your portmanteau (your magical box). Depending on how you've spend your experience, you'll have a certain number of Law, Chaos and Neutral slots that will offer you a different spell effect for the talisman placed inside of them. For example, the phosphorus talisman, when placed in a Chaos slot will give you the ability to cast Lucifer's Farewell (a spell that turns an enemy into a time bomb). If placed in a Neutral slot, the same talisman will give you haste and if placed in the Law slot will deliver Subversion (which causes an enemy player to join your side). Choosing the best way to use each of your precious (and hard to come by) talismans is a large part of the strategy of the game. While all of this may seem confusing (it's certainly been a real pain in the ass to explain), it actually makes a lot more sense once you look at it and get a feel for which spells you actually need.

Visually, Magic & Mayhem is a lot like X-Com was. There are a lot of great concepts and ideas wrapped up into art that is competent, but not anything to write home about. It's fairly easy to tell what everything in the game is, but none of it is really very impressive. The music is another story entirely. Put together by the Afro Celt Sound System, Magic and Mayhem's soundtrack is one of the most impressive I've ever come into contact with. The powerful fusion of techno bass and rhythm tracks with traditional instruments of ancient Europe is so overwhelmingly powerful that you'll find yourself wishing that you could play the tunes in your car stereo player.

So what's the verdict? Magic & Mayhem is a quirky little game that RPG and strategy fans will probably have a lot of fun with for a short period of time. Fortunately, its street price is fairly low (we saw it for $39.99) and it has a multiplayer element that, while not all that impressive, certainly adds a little bit of shelf life to the product. If you have the cash handy, and you've been looking for a game to while away a few hours with, you could certainly do a lot worse.