Here's the last nearly five minutes of the original airing of The Rockford Files episode 'This Case Is Closed' (S01E06) as aired over our local NBC affiliate.

The Rockford Files was first seen on national network television on September 13, 1974 and the last show aired on January 10, 1980.

Garner had only been appearing in movies and on television, for only one year when he captured one of the lead roles in Maverick as Bret Maverick in 1957.

Maverick was shown for the last time in 1962 and his next starring role is in the television series Nichols, which ran from 1971-1972.

The Rockford Files began its run on NBC television in 1974 and Garner appeared in all 122 episodes of the show.

I hadn’t seen a Rockford Files episode for many years, until this last week when I watched some of the very first episodes of the show.

Garner was seen in some short-lived series like Bret Maverick, 18 episodes, Man of the People, 10 episodes, Chicago Hope, 4 episodes, God, the Devil and Bob, 13 episodes and First Monday, 13 episodes.

He would return in 45 episodes of 8 Simple Rules, which was 14 more episodes, than John Ritter had appeared in, before his untimely death. 8 Simple Rules ended its run on network television in 2006 and it was Garner’s last appearance on a regular television show, although his voice has been used for some short videos.

The last movie appearance for Garner was in 2006, when he appeared in The Ultimate Gift, which didn’t fare well at the box office making only $3.4 million in about 9 weeks of being shown in theaters.

Rockford Files was ranked 39th in the list of the 50 All-Time Greatest TV Shows by TV Guide in 2002.

The Museum of Broadcasting has an interesting article, which states that The Rockford Files was one of the best private eye shows of the 1970’s.

Jim Rockford was portrayed by James Garner and his father “Rocky” Rockford was played by Noah Beery, Jr. who had already been acting in movies and television for 54 years, when The Rockford Files debuted on the NBC television network.

It is fun watching Jim Rockford tell his clients he demands $200 a day for his detective services, but then taking less in some cases.

The best thing about The Rockford Files is that it commands your attention, from start to finish and the casting director does an excellent job of casting the roles.

Anyone who receives Netflix can watch this series, at their leisure and most private eye fans won’t be disappointed, after giving the show a test spin, if they have never seen it before.

This week, Jim Rockford (James Garner) becomes a bit of a treasure hunter in this episode written by Juanita Bartlett from a story by Roy Huggins.

The phone gag is a doctor who leaves a message for Jim about the fact that he’s got broken bones in his hand, and is wondering if he had hit someone.

Rockford is hired by Jolene Hyland (Shelley Fabares) to help recover a fortune that her ill and imprisoned husband, Gerry (Don Eitner) hid before he was arrested. Thinking that if she finds the money she’ll be able to help get him out of prison and get him a good doctor, she agrees to Rockford’s fees and they go off to Caledonia.

Right off the bat, Jim realizes they are being followed by a couple of thugs, including cult favorite Sid Haig as B.J.

In the town of Caledonia they come up against a troublesome sheriff (Ramon Bierri) and Rockford leaves the case not intent on messing with the law.

Jolene, on her way home, is confronted by Gerry’s ex-partner and her ex-lover, Len (Richard Schaal), who reviews that he has directions to the fortune, if she knows the place…

Jim gets a cut of the deal, but right off the bat, its obvious Len is going to double cross them any chance he gets.

But before the end of the episode there are more twists and turns coming their way, and not all of them good.

This one was actually a lot of fun, as Jim tries to avoid the sheriff, stay one step ahead of Len, and has a bit of a flirt with Jolene.

Rocky (Noah Beery, Jr.) is sadly missing from the episode, but Jim’s fun dialogue and the plot make up for it. 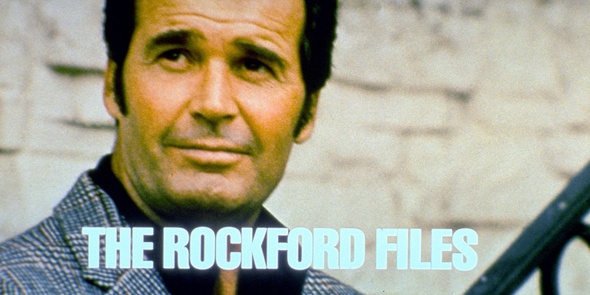 I also love the fact that Rockford negotiates the larger share of the money for Jolene by promising to only take 5% of the take, but Len believes he’s taking 33.3%, that is when Len isn’t try to screw them over, and betray them so he can take all the cash himself.

Sid Haig, is dreadfully underused, but is suitably threatening when he comes along…

The only thing I had a real problem with this time around, is Rockford’s sweater, I’m used to the blazers, and the shirts, that were emblems of the 70s, and rather reflect his blue-collar sensibilities but I think he can probably pass on this sweater to Rocky.

The end of the episode, as everything gets wrapped up, is rather funny, and leaves us wondering if Jim will ever make more than his $200/day plus expenses.

Next time around is another two-part mystery, Profit and Loss, with each part named appropriately, of course.